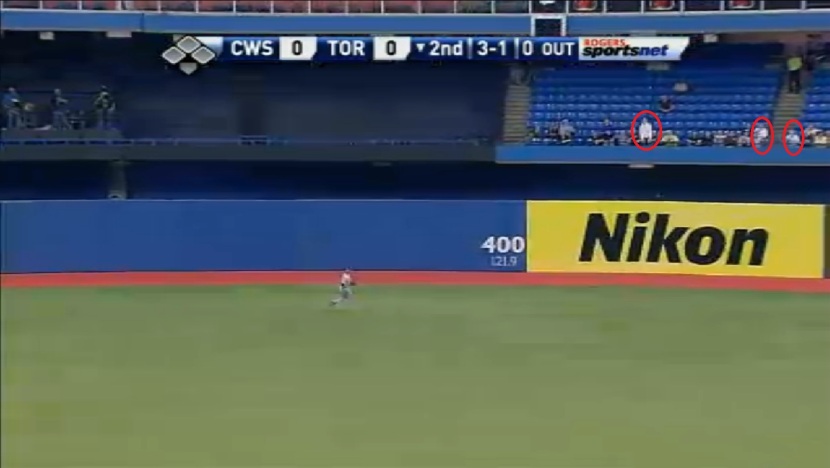 Based on the account of four anonymous White Sox relievers, certain sports writers have suggested that Jose Bautista has been found guilty of stealing signs with the help of a “man in white” perched in Sky Dome’s centre field. These unidentified White Sox offered nothing beyond anecdotal evidence of any cheating, namely that they saw this “man in white” raising his arm from centre field to indicate non-fastballs. The notion that Bautista has been “called out” is disingenuous since nothing was determined. An actual calling out, as far as I understand, involves the bringing to light of some level of guilt. And actual guilt, and declaring it, requires some semblance of evidence.

This has not taken place.

The most telling thing that has been glossed over in most media accounts is that there is no real statistical difference between Bautista’s power numbers, at home and away in 2011. Does the assertion then become that the “man in white” communicates the pitches to Bautista from a particular vantage point in every AL ballpark, US Cellular Field and the home of all White Sox included?

Where does that leave us?

One of the central pieces of what has been considered evidence, that Bautista’s stats are inflated at home, falls flat. There is no argument. It seems that certain sports writers don’t understand how a ball player can achieve Bautista’s level of success, seemingly out of nowhere. Would a player based in a different market be subjected to the same accusations, the “guilty of something” verdict based on anecdotal evidence from unnamed sources? His real crime is mashing home runs at ball parks everywhere. That evidence is awesome.

Why not enjoy the Bautista show?

I suppose it is understandable, in the wake of the steroid era, that certain followers of baseball may succumb to an alarmist bent. But Bautista is tested often. He doesn’t take PEDs. He must be guilty of something though, right? No, friends, there is no real evidence to support the claim that a “man in white” is helping him cheat to hit home runs. It is bush league and possibly jingoistic to claim otherwise.